Does the Bible say anything about dinosaurs?

The Bible mentions giant animals that might have been dinosaurs. 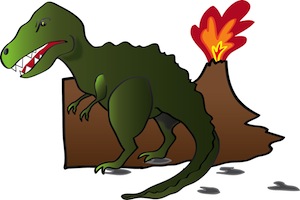 The Bible never uses the word "dinosaur," since that word wasn't invented until the mid-1800s (about 150 years ago). Until then, people probably called dinosaurs "dragons." The Bible uses a Hebrew word, tanniyn, which means "sea monster" or "serpent" or "dragon." This animal may have been a dinosaur or it may have been different, but it was probably a giant reptile of some kind. The Bible talks about these animals almost thirty different times in the Old Testament. It talks about them living on the land and also in the water.

Another animal the Bible mentions is the "behemoth," which means "great, kingly beast." When God talks to Job, He calls it the mightiest of all God's creatures, one with a huge tail like "a cedar tree." This description makes it sound different from any other animal we know of besides the big dinosaurs. This animal probably ate grass; even meat-eating dinosaurs were probably vegetarians when they were first created, just like people used to be before Adam and Eve sinned.

The Bible does seem to give us lots of reasons to believe that dinosaurs lived at the same time as people. The Bible never says what happened to the dinosaurs, but hunters may have killed them off. They also may have died because of changing weather or environment sometime after the worldwide flood of Noah's time.

Bible Truth
"Look at the behemoth. It is a huge animal. I made both of you. It eats grass like an ox. Look at the strength it has in its hips! What power it has in the muscles of its stomach! Its tail sways back and forth like a cedar tree. The tendons of its thighs are close together. Its bones are like tubes made out of bronze. Its legs are like rods made out of iron ... The hills produce food for it. All of the other wild animals play near it ... It is not afraid when the river roars. It is secure even when the Jordan River rushes against its mouth. Can anyone capture it by its eyes? Can anyone trap it and poke a hole through its nose?" (Job 40:15-18, 20, 23-24).


Your Next Move!
What is the Bible?

Learn More About the Bible!